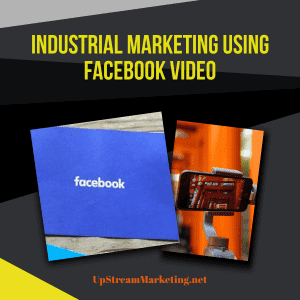 As an industrial business owner, you are sold on the idea of including video in your social media marketing.  But what would be best?  Would it be better to focus on YouTube or on Facebook?   We will go over the benefits of both in various posts.  But today, we are focusing on why Facebook videos might be best for your industrial business.

That is an average and many are spending hours on Facebook each day.

Consumers better recall content that they’ve watched in a video vs. what they’ve read. Multiple surveys and studies have found that the majority of people would much rather watch a video about something than read about it.

Some of the most important Facebook stats relating to video include:

Taking a little time to add captions could mean the difference between whether or not your Facebook videos get viewed.

People are five times more likely to watch video daily on a smartphone than on a desktop.

So there you have it, the many reasons why your industrial business might want to consider using Facebook videos to reach your clients.

Will Facebook reach everyone?  No, but it will reach the majority.   Does this mean you should rule YouTube videos out?  No.  We will go over all the benefits of posting videos on YouTube in a separate post.  My goal today was to just make you aware of why you should consider Facebook Video.

Why Use Video for the Industrial Business?