Do You Have Written Goals? 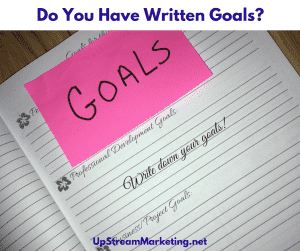 According to Norma Reid, a Certified Executive Coach, statistics show people who write down their goals have an 80% higher success rate of achieving them.

Many people underestimate the importance of goals. Even people we might consider very successful. Or they have goals but don’t write them down. They just keep them in their head and think that is good enough. Only 3 out of every 100 adults write down their goals down on paper. Do you?

I found this information on Harvard graduates very interesting:

The average Harvard MBA graduate starts his or her first job at $115K with a 30K signing bonus.   Some of these graduates end up being much more successful than their fellow graduates in the long run.

In 1979, a survey of graduates from the Harvard Business School found that :

In 1989 they surveyed these same graduates again.  The results showed:

These are staggering statistics!  And they certainly demonstrate the importance of having clearly delineated goals.  It appears people are much more accountable to written goals than goals they hold in their head.

Another researcher, Dr. Gail Matthews, a psychology professor at the Dominican University in California, recently studied the art and science of goal setting.  In her limited study, she discovered that those who wrote down their goals and dreams on a regular basis were 42% more likely to achieve their goals and dreams.

With any goal, accountability is KEY!  Find a partner for accountability if you have to.  Make sure you have written goals and once they are committed to paper,  work to make them a reality.

If you haven’t written your goals down, I encourage you to do that today.  It does make a difference!